The Trip of a Lifetime…

Since coming back from my trek to Everest Base Camp, I have found it difficult to describe the experience in a way that does it any justice. But here goes…… 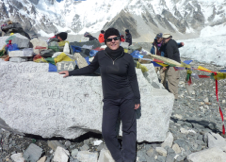 My biggest challenge, (apart from the altitude) was living in a tent for two weeks. I am not a natural camper but I am a firm believer in a comfy bed and running water. However when I think back one memory that stands out for me is unzipping my tent every morning and seeing a new scene of majestic mountains around me. For all that I found tent living difficult, I realise that if I hadn’t had to unzip my tent every morning I would not have had that feeling of wonder and awe and the wonderful reminder that I was in one of the most beautiful places in the world. What a way to wake up! 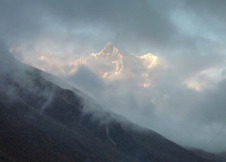 The Nepalese people match the mountains for beauty, the sherpa’s who helped us along the way were always smiling. Often they were carrying 90kg loads and running up in front of us in flipflops!! Never a scawl or an angry mutter did we hear from them. The children met us in villages with a smile and a “Namaste” to help us on our way. On our very last day we were met by a group of children at a point when spirits were flagging and the trek was taking it’s toll. They had hand picked flowers which they were handing out to the women in the group. You might think that this was a little contrived but their mother was working in a near by field and was paying little attention to us or the children. Often when I was struggling or feeling in low spirits I would be reminded by the children around me of the reason for my trek and I would think of the children out in Uganda who would be benefiting from the money I had managed to raise back home.

The feeling I had when I stood up beside the marker at Base Camp itself was incredible. However the feeling was nothing compared to the feeling I have when I think of the lives which will be changed out in Uganda because of my trek. The ability to change lives is a gift which here in Scotland we have been blessed with, and I can’t recommend it enough.